Sweet Sylvester came to Black Cat Rescue as an indoor/outdoor cat. Black Cat Rescue has a strict indoor only policy for all foster cats. We also require, as a term of our Adoption Agreement, that all adopted cats be kept indoors exclusively. At 13 years old, we thought he’d enjoy an indoor life where he could relax and take advantage of all the luxuries of indoor living. However, it seems that Sylvester has other ideas. He truly misses his time outdoors and expresses his unhappiness in a variety of ways. All day he will stare out the window, crying and longing to get out. After so many years of catching mice and other outdoor hi-jinx – he is just too unhappy inside the house all day. 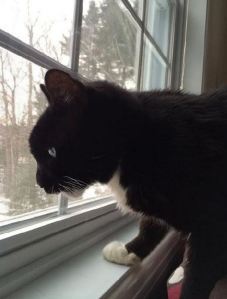 While we strongly believe that indoor environments are safest for our cats, we are also committed to providing each cat in our care with the best possible, individualized adoption outcome. We are dedicated to getting Syl back to the adventurous life that made him so happy. At this time we are seeking a safe, indoor/outdoor home for Sylvester.

Sylvester is currently being fostered in Chelmsford, MA. Check out his adoption page for more details: http://www.adoptapet.com/pet/10382412-somerville-massachusetts-cat

Meet the peaceful and dainty Pandora

Pandora has been hoping someone would invent kitty ear plugs.  The teenagers at her house have been practicing their instruments a lot lately. All that ruckus is  just a little too loud for her calm and tranquil disposition.  Now she is in her Black Cat Rescue foster home luxuriating in a space of her own and enjoying some much needed peace & quiet.  Pandora would be a great companion to someone who shares her appreciation for a chilled-out lifestyle. 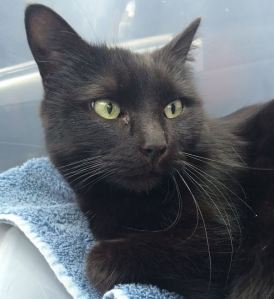 Check out my white go-go boots!!

Boots is a young cat with lots of spunk! He’s energetic and playful , which is typical for a 1 year old!! Boots will do best in a home where he can get lots of stimulation and attention to keep him busy.

Boots was staying at a local shelter but being confined in a cage wasn’t his style and he was acting too shy during his adoption visits. Luckily, Black Cat Rescue exclusively uses foster homes to house cats while they await their forever home. We are so happy to provide Boots with a chance to really be himself in a home environment so he can show-off at his adoption visits.

Posted in Meet Our Cats

Happy Tails: Simon has been adopted! 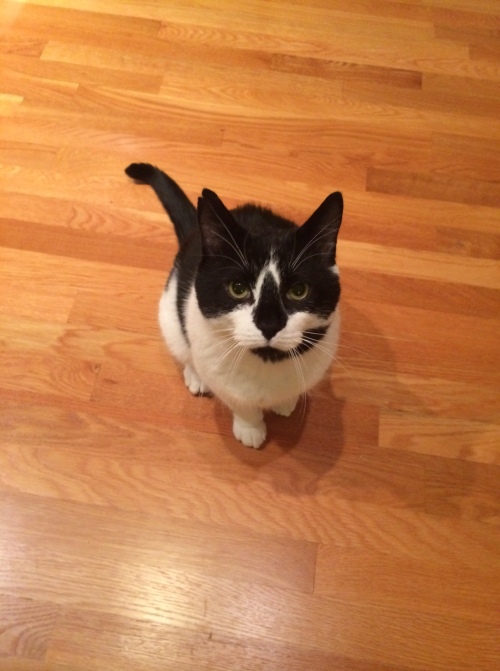 Simon turned on the charm for Theresa.

One of our Foster Volunteers, Nadja, brought Simon to our attention because a friend of hers had taken him in when he was found outside in very cold weather.  Nadja briefly fostered Simon, but he tested positive for Feline Immunodeficiency Virus (FIV) so we moved him to a foster home with no other cats. Simon was nervous around his new foster dad at first, but after a few weeks they really became dedicated couch buddies.

Simon ran right over to Theresa..

Theresa just moved to Boston and was looking for a new feline friend.  She specifically wanted a cat less likely to be adopted.  Since Simon is a little older and FIV+, we thought he’d be a good fit since she has no other cats.  When Theresa walked in to meet Simon he ran right over to her and didn’t leave her the whole visit.  We’ve never seen such a successful adoption visit!  Theresa didn’t want to leave without him, but Simon definitely wouldn’t have let her leave. 🙂

Simon soaking up the love while getting to know Theresa.

An update after their first night together:
“Oh my gosh, Simon is the sweetest little love bug ever!  After a brief stint of hiding in the closet, he is now glued to me, following me around the apartment and hopping in my lap whenever I sit down.  He’s already eating like a champ and using the litter box.  I think this is the beginning of a beautiful relationship.”

The beginning of a beautiful relationship.

Congratulations to Simon and Theresa!