Black Cat Rescue is pleased to announce the adoption of Storm! 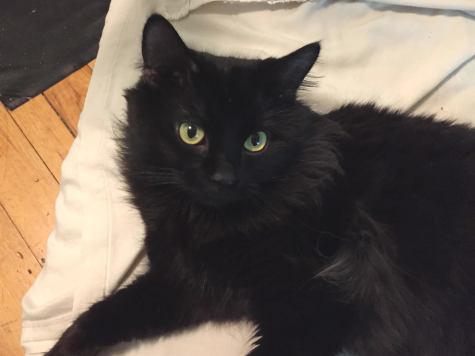 Black Cat Rescue is thrilled to announce the adoption of Storm!

Black Cat Rescue often receives black cats who may be considered for euthanasia at traditional high-volume animal shelters in our community. As a foster-only, No Kill organization, transferring to Black Cat Rescue has spaces that can be less stressful and more appropriate for some of the more timid or special needs cats.

Storm went to his foster home and settled in fairly quickly. After a few days in hiding, he started to open up to his foster family, Jess and Austin. The first thing they noticed (aside from his gorgeous long coat and soulful eyes) was that when Storm isn’t hiding or napping, he’s actually rather fierce! His playing was more like rough-housing and he became pretty agitated when he was startled. It was clear some socializing and rule-setting was necessary. 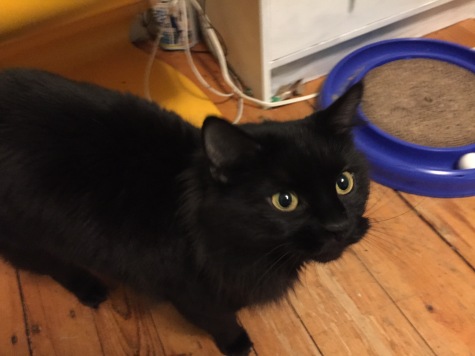 Storm arrived in his foster home and we were instantly struck by his fluffy coat and gorgeous eyes! The extra scruffy fur around his neck makes him look like a little black lion!

After the mandatory week of isolation, Jess and Austin began integrating Storm into their home with their resident cats. The younger resident, Ichiban, and Storm became fast friends, running and wrestling with each other, or just hanging out on a comfy chair! As a side benefit, Storm’s behavior improved! With a new friend, Storm had less energy for unwarranted hissy fits (literally!) and he felt more secure so he was less fearful.

After a few weeks, Storm had a potential adopter lined up, but when she visited with him it just wasn’t the right fit. When reflecting on the visit, Jess and Austin realized how sad they would be to see Storm go. She was settling in so well at their house with their pets, and her tragic story of losing her first owner broke Jess’ heart. After much discussion, Jess and Austin decided to adopt Storm! 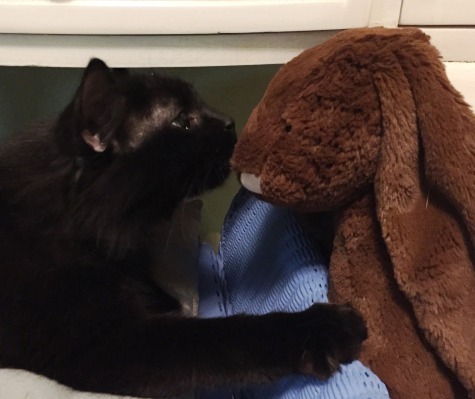 We are so thrilled for Storm and his new family! We know he’ll be playing with Ichiban for years to come and he couldn’t go to two better people than our dedicated foster volunteers, Jess and Austin.

This entry was posted in Uncategorized. Bookmark the permalink.