This Happy Tail has been almost four months in the making, but today Black Cat Rescue is so pleased to announce the adoption of Milo!

Milo has been adopted! Congratulations Milo!

Milo came to Black Cat Rescue when his former owners brought him to the vet to be put to sleep for a urinary tract infection they were not willing to treat. Despite his illness, Milo was super friendly and gentle with the vet staff. Milo is a young cat, around 2-3 years old, and it was clear that he should get a shot at a long happy life with a family. Instead of euthanizing Milo, the veterinary staff chose to treat Milo’s infection and contact Black Cat Rescue to find a safe space for him.

Milo is a quiet soul, and he startles easily, so he took some time to settle into his foster home. Diane the Foster Volunteer has developed quite a reputation for being able to bring shy cats out of their shell, so Milo went right off to Diane’s house.

Milo loves other cats. When he first arrived in foster care, he hid constantly. As he settled in he noticed Ellie, the resident cat in his foster home, and it was like she flipped a switch in him! Milo immediately came out and started flirting with Ellie from across the room. His comfort with Ellie transferred to the humans in his foster home and Milo has been a dedicated couch potato and cuddler since!

Bill contacted BCR in January looking for a friendly adult cat. He had always had cats and his last cat had recently passed away. Milo caught his eye, but Milo was awaiting follow up bloodwork to make sure he was totally clear of his UTI. Bill was happy to wait until after Milo’s bloodwork had been completed. In March, Milo went to the vet and the bloodwork came out fine, but Milo needed dental surgery. Bill was still patient and excited to meet Milo whenever he was ready. 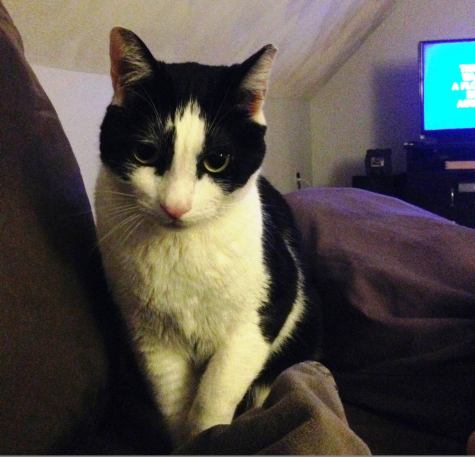 Milo needed bloodwork and dental work before he could go to his forever home. Bill was so patient in waiting for Milo to be ready to meet him!

Finally, in early April Bill met Milo. We worried that we might have to keep Milo in the carrier to meet Bill, since he is so shy. But when Susanna our Adoption Coordinator arrived for the visit, Diane was holding Milo  and Bill said he had even held him for a bit!  After a week at home Bill said, “He comes out looks at me for a while then heads back under the bed. Making progress every day.”

Congratulations to Milo and Bill! We are so happy for you and wish you many years of happiness together.